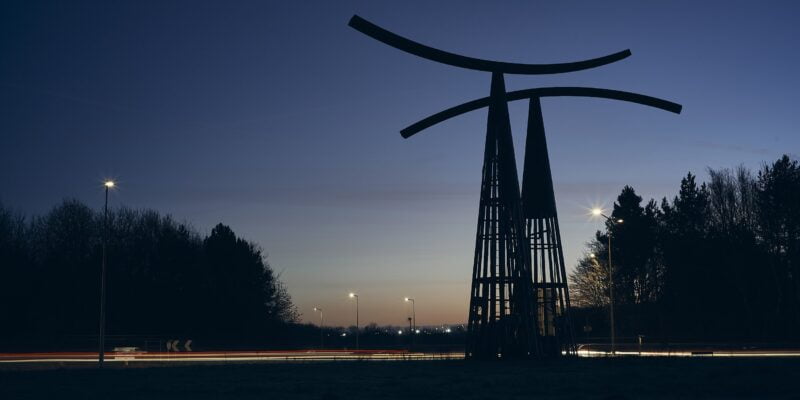 Secret Station, a Cardiff landmark from 1992 when Cardiff Bay Arts Trust commissioned artist Eilis O’Connell to design a monument for the gateway into the Cardiff Bay redevelopment project. The project transformed the bay area from an industrial wasteland into a permanent lake fronted by bars, clubs and restaurants and hotels and put Cardiff on the map at the turn of the Millennium as one of the UK’s up and coming cities.

Made using bronze, fibre optic light, and steam, which stopped working a long time ago, the landmark boosted the entrance to one of the main routes into Cardiff Bay and was an imposing sight.

For more than a few years now, though, Secret Station has stood derelict and gradually stripped of its bronze/copper skin, leaving it now standing naked and fully exposed to the elements. The inner workings were visible, which, when initially built, would puff out smoke/steam to passing traffic. Those days are gone, the smoke machine having long given up the ghost, but the structure still stands, although for how long, who knows?

Initially, I photographed Secret Station as part of a City and Guilds project for a Ffotogallery photography project on Cardiff Bay, a couple of years following construction. I wanted it to be in black and white and a long exposure of a couple of seconds to capture light trails from passing traffic. This was taken around the same time as my photographs of the Norwegian Church and St David’s Hotel.

In 1992 this was shot on a Hasselblad 501 with an 80mm Zeiss lens on Ilford Delta 100ASA black and white film. I developed this in the Ffotogallery darkrooms and printed it on Ilford fibre-based paper.

Lately, I’ve been using the PhotoPills app to better plan my photography. It has a fantastic amount of data on times of sun, moon, milky-way rises, and settings, plus you can plan ahead of time to see what time you need to be there to catch the perfect photograph.

Photographing this a second time, I used a Sony A7 iii with Voigtlander Nokton 40mm lens @ f16 for about 8 seconds.

Since posting this update, I reached out to Eilis O’Connell through my Instagram, and she graciously replied. With her permission, I’ve posted the replies here on my blog. It is such a shame that Cardiff Council have let this treasure fall into disrepair. See the comments below. 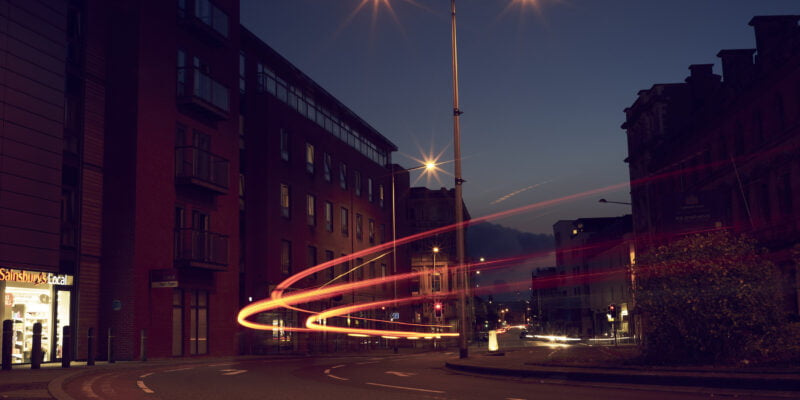 Luckily for me, a bus drove past during the exposure

A second exposure with more traffic passing. You never know what you’ll get when you shoot long exposures like this.

Taken on a Sony A7R, which was new to me at the time these pictures were taken in Cardiff Bay. I set up my camera onto a sturdy Manfrotto tripod and then just waited for traffic to come through. I set the exposure to be f22 at about 8 seconds to maximise the starlights.

I then post processed in CaptureOne. For the main edit, I decided to get rid of the Sainsbury’s corner shop in the bottom left corner as it didn’t seem to add much to the picture and was more of a distraction. Once I’d cropped that out, I worked through the tabs gradually reducing the colour of the sky and lightning the image to add more interest and let the starlights from the lamppost in the centre and at the back, come to life.

one advantage of working with such a small aperture (f22) is that you can see the individual lens blades. The lens I used here was a Nokton f1.4 from Voigtlander, paired with a Sony A7R was great for landscape work, especially when using a tripod, as you’ve more time to get the focus right. The Voigtlander is a completely manual lens, no autofocus here..! Old school, but works a treat when you take your time.