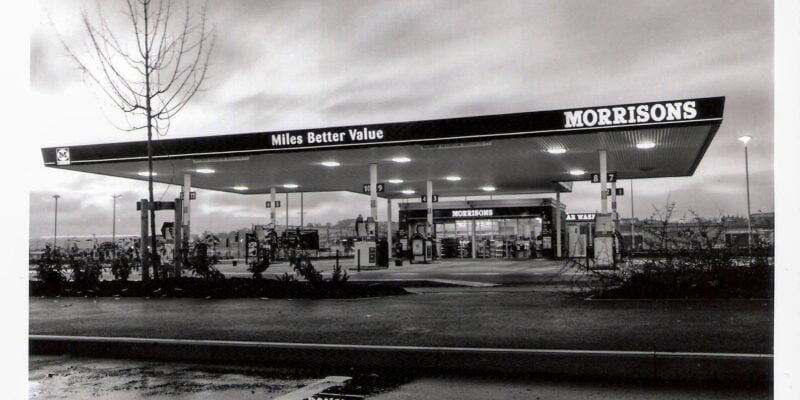 My theme from a City & Guilds project in 2007, although the other 25 gas stations have yet to be photographed, was based on the work by Ed Ruscha. Reason for the project, as the world starts shifting to electric, then these are going to fade and disappear from collective memories.

Edward Ruscha’s iconic 1963 artwork, “Twentysix Gasoline Stations”, was a collection of photographs taken along the famous Route 66 spanning the United States. The gas stations featured in this series represented some of the most well-known brands in the country, including Chevron and Standard Oil. Each photograph captured the classic gas station architecture of the time, from tall arches and visible gas pumps to bold lettering and clean sidewalks. These images painted a vivid portrait of Americana at its finest.

View the book by Edward Ruscha ‘Twentysix Gasoline Stations’ 1963 – the inspiration behind this project, which is featured here on the Tate Gallery.

Now, all I need to do is complete the project and continue photographing gas stations around Wales. I’ll do this, and post the images here as they get done. 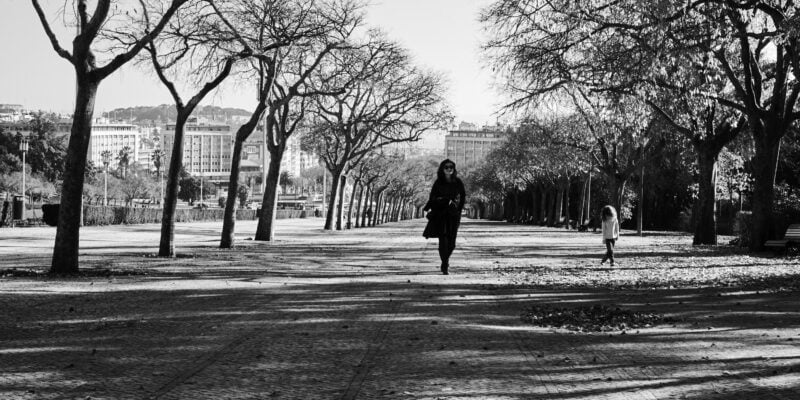 A black and white picture of my wife and eldest walking through one of the main parks in Lisbon, Portugal. My eldest was having issues walking and didn’t want to walk any further, not that the walk we’d been for was incredibly long. She was probably about 4 or 5 at the time and was making her feelings known!

In case I ever get in the fortunate position of being able to getting back into a darkroom with a roll of film, then these are the settings that I used for a number of years.

Years ago when I shot film, and after studying a couple of City & Guild courses in Landscape and Darkroom photography, I learnt the craft in more detail of taking and then making a great photograph. I studied the Zone System developed by Ansel Adams, which in a nutshell about trying to faithfully reproduce the whites and blacks in an image, instead of ending up with a series of dull greys.

A shortcut to learning the Zone System is to expose for the shadow areas and then process for the highlights and slightly over expose your film but then hold back development. To do this, I’d shoot with Ilford Delta 100 ASA, I would set the light meter at 80ASA and expose the film 1 (N+1) stop more, and then when I processed the film in ID11 in the darkroom, I would reduce the development time N-1 to 7 minutes 30 seconds. Normal development for stock solution, (straight out of the tin) was 8 minutes 30 seconds.

The effort was worthwhile, because I found that it was a natural way to photograph and get results that had good level of strong contrast. My photographs of St David’s Hotel, and the Norwegian Church and also Penarth Pier are a couple of examples.

For years this Ilford Film Development chart was on my wall, a poster from Ilford, on it every film type with suggested development times at differing strengths from stock to 1:1 to 1:3, all at a temperature of 20 centigrade.

Looking at film prices earlier on the Ilford website, I doubt as though I’ll ever return to it, at £6 per roll of 120 film, it’s just too expensive. Though I enjoyed the workflow of developing first a contact sheet, then choosing the pictures from there that I would enlarge, was a satisfying process. This hasn’t necessarily translated to shooting digitally.

I will post more on this, and put up some of the images of the darkroom that I put together at home. 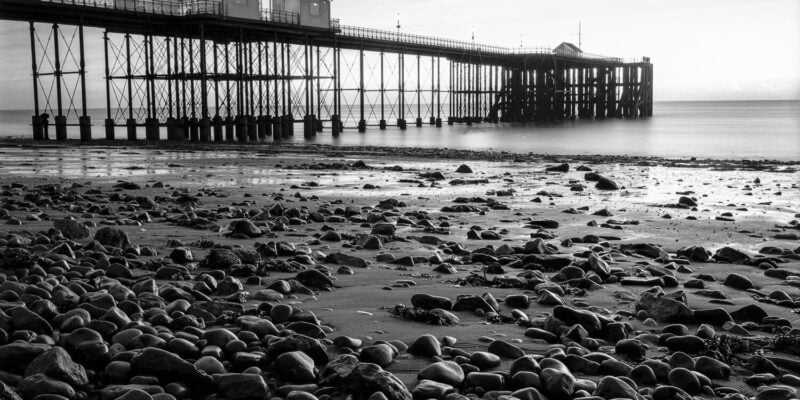 Taken at first light, from memory around 2007 on film, Ilford Delta 100asa, and probably at 6 am. I remember well because I must have set up my tripod and camera at 5.30 am or something like that and by the time I’d finished taking pictures the lights on the pier suddenly went out. I think that it was 6 am, and it felt as though it was great timing. The starlight from the lampost would have been missing if I’d arrived later than I did. I wouldn’t have known either..! and for me, it helps make the picture. The mist from the waves rolling in was also something I hoped to photograph. It is why I used an exposure of about 2 minutes at f22. I’ve not been back to Penarth to re-shoot this on digital, but looking at it again tonight as I write this, I’d like to get out and re-shoot it. I need to make sure I look up the tide times and arrive early knowing that the tide is out and that it needs to be at low tide around an hour before sunrise. So there are quite a few ducks you need to get into a row before you can be sure that you can bag a great picture. This visit though was pure luck. I got lucky, but sometimes that’s how it goes. :o)

Taken with a Hasselblad 501c with a 50mm wide angle lens.

Edit: I’ve dropped in a picture of the pier that I took a few years before, this time though it was on Fuji Velvia 50ASA, and again was captured at sunrise in the summer, from memory this was about 4:30 to 5am. Also, this was taken with the standard 80mm lens, which is why you can only see the end of the pier. 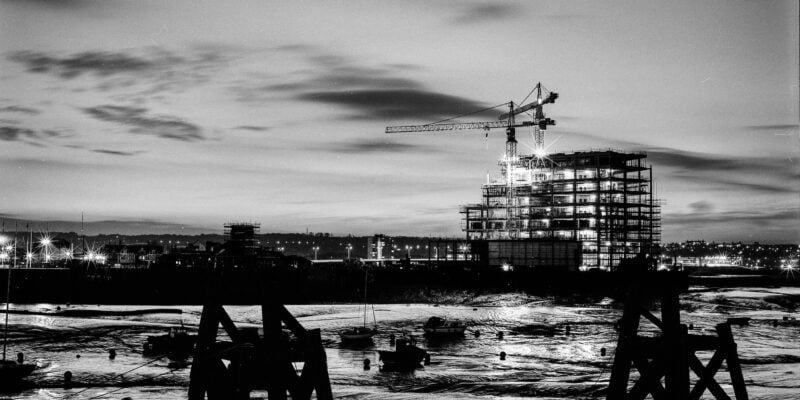 In the 1900s Welsh coal was known throughout the world, it was considered the best of the best. Ships from all over the world would come to Cardiff to fill their holds with the stuff. Roll forward a hundred years, more or less, and things have moved on. This area of Cardiff became known worldwide as Tiger Bay. The area is in ruins, and the coal is gone, and the ships retired. All that is left is the murky mud flats visible twice a day at low tide, and the old wooden remains of what used to be the quays that the ships loaded up alongside.

To regenerate the area in the 1990s, the UK Government pumped money to transform from the industrial past into a vibrant future based on shopping, tourism, restaurants and bars. One part of this major plan that has seen Cardiff rise in the ranks to become one of the top cities to live and work in the UK was the building of a barrage across the mouth of the River Taff to form Cardiff Bay.

At the same time, I was doing a City & Guilds photography course on Black and White Landscape.

I wanted to take pictures before the flooding of the mudflats for posterity. I wanted to contrast the old with the new. A new hotel by the Rocco Forte Hotel group was in the process of building Cardiff’s first 5-star hotel, and the mudflats were in the foreground, making a great composition. I took the photograph of the Norwegian Church at the same time, and a few others that I’ve still yet to scan and upload…but I will, in time.

I took this with a Hasselblad camera mounted on a tripod for a long exposure of around one minute at f16/f22. I wanted to set the aperture right down to get as many star lights as possible, and luckily the lights on the hotel construction provided just that.

The clouds provide just the right amount of movement, and there’s plenty of drama in the foreground, and the two cranes were in perfect position.

It was always one of my favourite pictures and looking back on it still is..!